In most posts and articles I read (and I’m generalising) there is a tendency to assume that power is hierarchical, top-down, and exerted by more powerful over less-powerful individuals. This is what might be called a dualistic or modernist view of power. In an ecological perspective however, power is an energy that circulates through the capillaries of network – both in biological terms and in social organisations. This ecological postmodern view is shared by theorists such as Foucault, McLuhan, and Bateson, who have a common understanding that:

“an individual is not a discrete and passive entity who is buffeted by the forces of power. Rather, the notion of an individual is itself an effect of the ways in which power is expressed through all the relations that constitute and sustain the patterns of social life. An individual (in terms of self-concept and ways of thinking and acting) is largely constituted by the networks of relations that regulate language patterns, status systems, social customs, modes of expression, and all the other forms and processes that intertwine in the fabric of a culture. In this view power is not a hierarchical construct that is held by a dominant group and then wielded over the oppressed. Rather, institutional power circulates through the arteries and capillaries of the body of reason, and exists as a set of relations between the forms of knowledge and their material manifestations. ….

In this sense the teaching/learning situation is also constituted by the networks or ‘capillaries of power’ that establish the dominance of certain discourses and sustain the technologies that connect knowledge to power. This implies a view that is different from the administrative and managerial hierarchies usually seen as the structures of academic power. The focus of analysis here is on the technologies of power that produce knowledge about both the institution and the individual, and in the process control both …..

The “capillaries of power” in the university can be conceived of as various nodes and networks of relationships between the mental ecology or idea of a University, and the university corporation ? the staff, students and the buildings they learn and work in. Here there are primarily three sets of nodal relations which interact with each other in various ways to form the patterns that characterise academic activity: 1) the canonisation of the general education curriculum, 2) the induction of the novice scholar, and 3) the evaluation of staff. To these I have added a fourth ? the standards and criteria for granting of degrees established by external agencies such as accreditation bodies or quality assurance processes……” (Frielick 2004 p155). 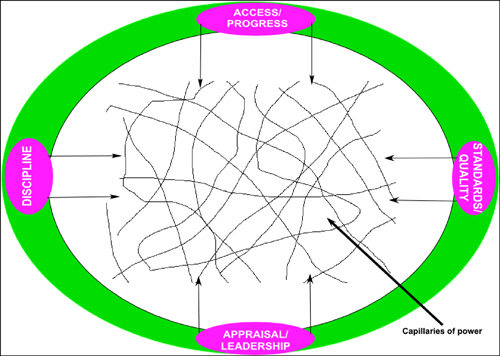 These 4 ‘nodes’ of capillary power are what we have to focus on if we want to bring about any sustainable change in a teaching/learning ecosystem. They can all be characterised by a closed…open continuum or dynamic – where in traditional institutions the bias and focus of activity is directed towards closed modes of gatekeeping and control. For example, the ‘discipline’ or ‘canon’ set of power relations forges a complex set of constraints over the content of courses and the types of knowledge accepted as ‘valid’ in a curriculum. Largely, these have been set and maintained over centuries by the ‘technologies of power’ inherent in scholarly journals, professional associations, academic committees, etc. As with the other sets of capillary relations in the diagram – the internet and networked open knowledge movements are rapidly disrupting the sets of power relations around disciplinary canon. As knowledge increasingly becomes free and open, and as networks enhance connectivity between different branches of knowledge, the traditional canons and gatekeeping apparatuses will dissolve (but not so simply). The important question though is how to maintain some kind of framework for legitimating and validating knowledge. Personal learning environments, RSS filters, consensus through rankings, are all evolving quickly and will no doubt form an important part of a new process that is more directed to open empowerment rather than closed systems of control.

Similar processes are happening at the other nodes and complex pathways of our traditional knowledge ecosystems. The emerging tools and approaches of networked learning will surely play a major role, but we must not be deluded that this is an automatic process that will just happen because of the inevitable evolution of technology. The system of power has to be seen eco-logically, not as a hierarchical construct of presidents, managers, and so on down the ranks. Every individual can be a node of change. Teachers can and are letting go of traditional concepts of curriculum, declarative knowledge, and the ‘expert’ as source. The approach is, as Foucault suggested:

“to analyze the specificity of the mechanisms of power and to build, little by little, strategic knowledge. What we have to present are instruments and tools that people might find useful. By forming groups specifically to make these analyses, to wage these struggles, by using these instruments or others: this is how, in the end, possibilities open up….”

2 Responses to Capillaries of power